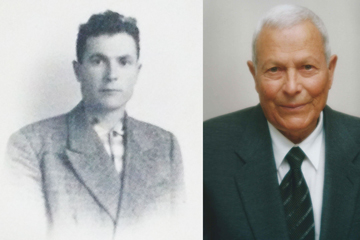 From 1943 until 1945 Italian soldier Elio Bizarri was a Prisoner of War in Germany. After Italy had capitulated the German Army turned on their former allies and captured any italian soldiers still behind their lines. They were offered two choices; going to back to the front lines to fight the Allies or spend the remainder of the war in a Prisoner of War camp. One of these camps was liberated by the I&R platoon of the 329th Infantry Regiment, commanded by Lt. Sam Magill. Elio Bizarri was among the Italians set free by the men of the I&R platoon. Before he passed in 2015 he wrote this letter to thank them:

Dear friends, dear veterans,
Seventy years ago in Germany, our paths and our lives met for the first time.
From 1943 to 1945 I was a prisoner of the Nazi war at the Holzen concentration camp, close to Hannover. I was freed by American soldiers who saved my life and gave me back my freedom and my dignity as a human being. I had never known the names of those heroes, but all my life I have been thanking God for sending them my way in my darkest hour. Today, close to my ninetieth birthday, weakened by my disease, I feel the need to say “Thank You” to those men but before I die I wanted to know their names. I wanted to know whether some of those men is still in America because I wanted to thank them. I had to tell them in person that I have never forgotten what they have done for me and I will carry them in my heart from here to eternity.
For this reason, one year ago I asked my grandson to start researching in the National Archives in order to find out who were the men who came at Holzen to save us all. This is the reason why I am writing this letter: after 70 years, today I finally know the names of the brave soldiers who freed me from imprisonment. It was you, the “Thunderbolts” of the 83rd Infantry Division.
In 1943, after we were captured, German soldiers asked us to go back and fight against our Italian brothers and our American allies, but none of us accepted. We would rather die in struggle than to shoot at our people. This was our last resort to continue to fight back oppression. We were surviving as animals, reduced to poverty and scared to death by Nazi violence. We were working 15 hours per day, even with fever, at an underground factory where it was even hard to breathe: disobeying or simply speaking too loud was more than enough to be executed on the spot. Our lives weren’t worth a dime and everyday our destiny was in the hands of fate and luck. We were only numbers, we weren’t men.
So when you lose hope, when you’re afar from the people you love, when you’re without your freedom as a man and you don’t even have the strength to see your future on the horizon, then you can only pray that somewhere out there there are courageous men ready for anything, even to risk their lives to save yours. You were our only hope.
In the last days, we knew you were in the nearby: bombings were more frequent and Germans were more nervous. However the time that separated us from you felt like forever. Then, after two years of imprisonment, in the afternoon of April 7th, 1945 a column of American soldiers arrived at our camp. They tore the fences apart and broke the chains of our mines. The captain of the squad looked us square in the eye and said a sentence that I will never forget: “Italians, you are now free. You have three days of carte blanche.”
After a year-long research, I discovered that the captain was actually the Lieutenant Samuel Magill who set us free from Nazis that day, together with the men of I&R Platoon of the 329th Infantry Regiment. In the following days, we became friends with many of you. You encouraged us, you comforted us,
and you helped us with everything. Thanks to you we had been brought back to our lives, our hopes and our dreams. I remember a Sergeant who looked at my shredded shoes and then he smiled and took out of his bag a pair of brand new shoes and told me: “Hey Paisan, take these so you can go back home!” And so, few months later I went back home with those shoes and saw my family again.
All my life I have brought in my heart a great sense of gratitude and respect towards the United States of America. I have never forgotten the spirit of sacrifice and courage you fought with for me, for my friends, for the whole Europe. Through all these years I have never lost trust in the values you taught us with your sacrifice: no society can do without democracy and freedom. I’m still sure that today, after 70 years, wherever in the world a man is fighting against oppression, he has an American soldier right next to him ready to fight and even to die to give his freedom back.
Thank you wholeheartedly to the soldiers of the 83rd Infantry Division. We will never forget what you have done for us. You wrote a unique page in history, a page about heroes who wrote with their blood the word “freedom”.

The letter and pictures were send to us by Elio’s grandson; Biagio Cimini. If someone wishes to contact Mr. Cimini or has more information about the 83rd soldiers that liberated Italian Prisoners of War during World War 2 please contact us through our email